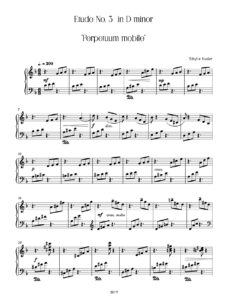 The purpose of this etude is to show off how fast you can play.

More important than tempo however is a very clear and clean, almost non-legato, touch. There are a few places where pedal is indicated but for the most part this is a “dry” etude to show off finger facility in a perpetuum mobile style, evenness in touch. and a very smooth transition from hand to hand.

This piece is not as difficult as it sounds:

– there are only a handful of places where both hands play at the same time, other than that everything is played with alternating hands: three notes in the left hand followed by three notes or a chord in the right hand, which gives one hand a rest while the other plays – the piece consists almost exclusively of three step-wise ascending or descending notes, and three-note chords

– chords, whether broken (arpeggiated) or blocked (all three notes at the same time), fit the hands very well; most span a sixth or less, two span a seventh; and the two large chords at the end can be reduced to fit a smaller hand.

The student needs to be familiar and comfortable with moving freely and at times quickly around the keyboard, and be familiar with playing chords in D minor (and its relations) and F# minor.

Other than speed, there is not much going on in this etude, so a student with a sense for flair and drama will be well-suited to avoid making it sound too mechanical.

– crushing the three-note scale fragments and blocking the broken chords – all three notes at the same time – may help to get a feel for how the hands move, which helps with speed: you can’t play fast if you don’t know where you are going!

– due to the frequent use of patterns – and because it is essentially one long chord progression -, this etude can be taught by rote which allows for the focus to be on technique which is to be understood as the study of motion: carrying the sound seamlessly from hand to hand.

– this etude could be an opportunity to work on chord technique as it relates to moving in and out of the keys to accommodate black keys within the chords.