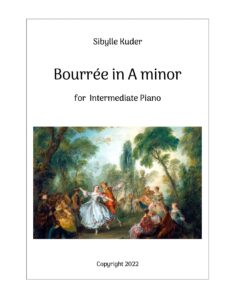 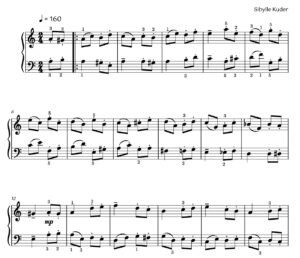 The Bourrée is a dance of French origin. It resembles the Gavotte in that it is in double time and often has a dactylic rhythm. However, it is somewhat quicker, and its phrase starts with a quarter-bar anacrusis or “pick-up”, whereas a Gavotte has a half-bar anacrusis.

In the Baroque era, after the Academie de Dance was established by Louis XIV in 1661, the French court adapted the Bourrée, like many such dances, for the purposes of concert dance. In this way it gave its name to a ballet step characteristic of the dance, a rapid movement of the feet while en pointe or demi-pointe, and so to the sequence of steps called pas de bourrée.

The Bourrée became an optional movement in the classical suite of dances, and J. S. Bach, Handel and Chopin wrote Bourrées, not necessarily intending them to be danced.

In his Der Vollkommene Capellmeister (Hamburg, 1739), Johann Mattheson wrote of the Bourrée, “its distinguishing feature resides in contentment and a pleasant demeanor, at the same time it is somewhat carefree and relaxed, a little indolent and easygoing, though not disagreeable”.