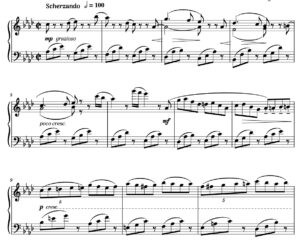 Pleasing, pleasant, smiling, playful, scampering along without much sense of urgency.

Doesn’t require advanced technical or reading skills other than being familiar with reading and playing in the key of A flat. It does require the ability to play very evenly though, nothing bumpy in this piece! Level 6.

Like a wildly spinning top that only twice comes to an abrupt stop, the A section pressing forward and unforgiving, the B section playful and light, this needs to be played “Allegrissimo” which is very fast but with a different character than Presto. It requires a well-developed technique that can handle RH passage work with ease. Level 8, due to the very fast tempo.

Starts very sweet and gentle, softly like a Nocturne – though without the lilting character – but quickly changes character, several times, before developing into a fortissimo coda-like ending which after just a few measures disappears into nothingness.

Key changes and chromatic writing as well as unexpected harmonic shifts make this piece potentially not easy to read. However, rhythmically it is uncomplicated, and technically, everything fits the hands very well. For instance, LH arpeggiated accompaniment patterns over more than one octave are always ascending and hardly ever fill the entire measure. What this piece requires is a well-developed sense of flair and an intuitive ability to create drama and suspense, both with touch and timing. Level 8.

Note-wise identical to the first piece, Piacevole, but played much faster, in a fleeting manner, flying away. Needs an extremely light touch. Level 7, due to tempo and the need for subtle shading.